IBF Lightweight Champion, Rances “Kid Blast” Barthelemy (25-0, 13KOs) won via split decision over Mickey “The Spirit” Bey (22-2-1, 10KOs). Round 2, Bey was credited with a knock down, which upon review was a clash of heads. ‘Kid Blast’ controlled the fight by keeping Bey at arms length. It would seem, Barthelemy would win by unanimous decision. However, this is the world of boxing and in this world nothing is ever that easy. Two judges scored the fight 116-111 and 117-110 for Barthelemy. However, another judge scored the fight 116-111 for Bey,  astounding bemused the crowd.

Bantamweight Emmanuel ‘Manny’ Rodriquez (15-0, 10KOs), clenches bragging rights for his native; Puerto Rico, in a one-sided match up against Alberto Guevara (24-3, 9KOs). Guevara would be on the receiving end of a left eye cut, after an accidental clash of heads in the 4th round. Rodriquez won by unanimous decision. The scores were 99-91, 100-90, and 99-91.

In an entertaining bout, Leroy Payne (Headbangers Gym) and Tariq Harris (1st Class Gym) warred in the ring; with Payne pulling off the victory for the 141lbs Championship.

Mike Crain (Dog Pound) defeated Kalonni Daily (Sugar Ray Gym) for the 151lbs Championship.  Ashton Sykes (Switch Hitters) won the 165lbs Championship with a win over Antonio Haywood (Hillcrest Gym). The bout was called after Haywood could not continue due to a shoulder injury. 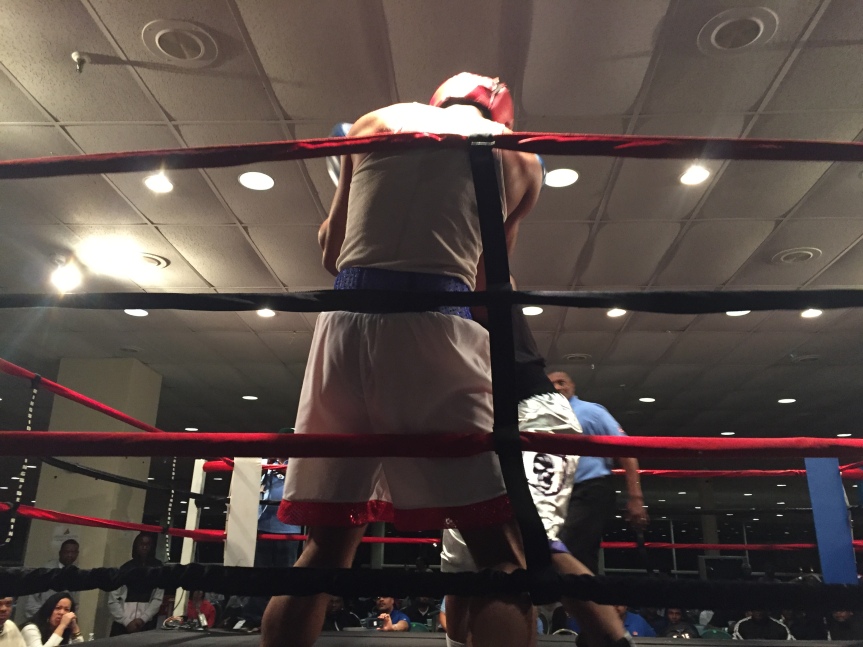 The 201+ division saw two Championship fights. In the first, Thomas Mottinger (Main Street Gym) defeated Jordon Scott (Woodland Tigers) for the 201lbs Championship. Post fight, Mottinger spoke about how boxing has made him understand true sacrifice. The up and comer works hard, makes time for family, trains constantly all while attending college. Mottinger doesn’t stop there, he gives reverence to his spiritually saying, ” I hope God continues blessing me.

Malik Jackson (Limelite) won the 114lbs Championship over Paul Jerry (Fighting for the Future). Hector Soto (Downunder Gym) defeated Christopher Glen (Hagerstown Boxing) for the 123lbs Championship. In the 132lbs Championship,  Tommy Avelar (Sugar Ray Gym) defeated Ebrima Jawara (Laurel Boxing Club). Avelar,  was surrounded by family and friends and was just over the top excited about the next step in his burgeoning  career; “Im looking forward to the regional Championship then Nation -wide BABY!”

Tyrek Irby (Headbangers Gym) defeated Joshua Lee (Umar Gym) for the 141lbs Championship after the Referee call the fight when Lee could not continue due to an arm injury. Young Mr. Irby has aspirations to win the Nationals, after which, become pro.

BoxHerNews would like to spotlight one of the people who make the Golden Gloves possible. This guy is typically one of the first ones in and last one out. He is a multi-tasker who doesn’t mind giving a helping hand, where ever its needed. Bobby White; Doorman/Bouncer/all around caretaker or all put together, Chairman of the board. And By the way, did we tell you he is “Fresh -To-Def” 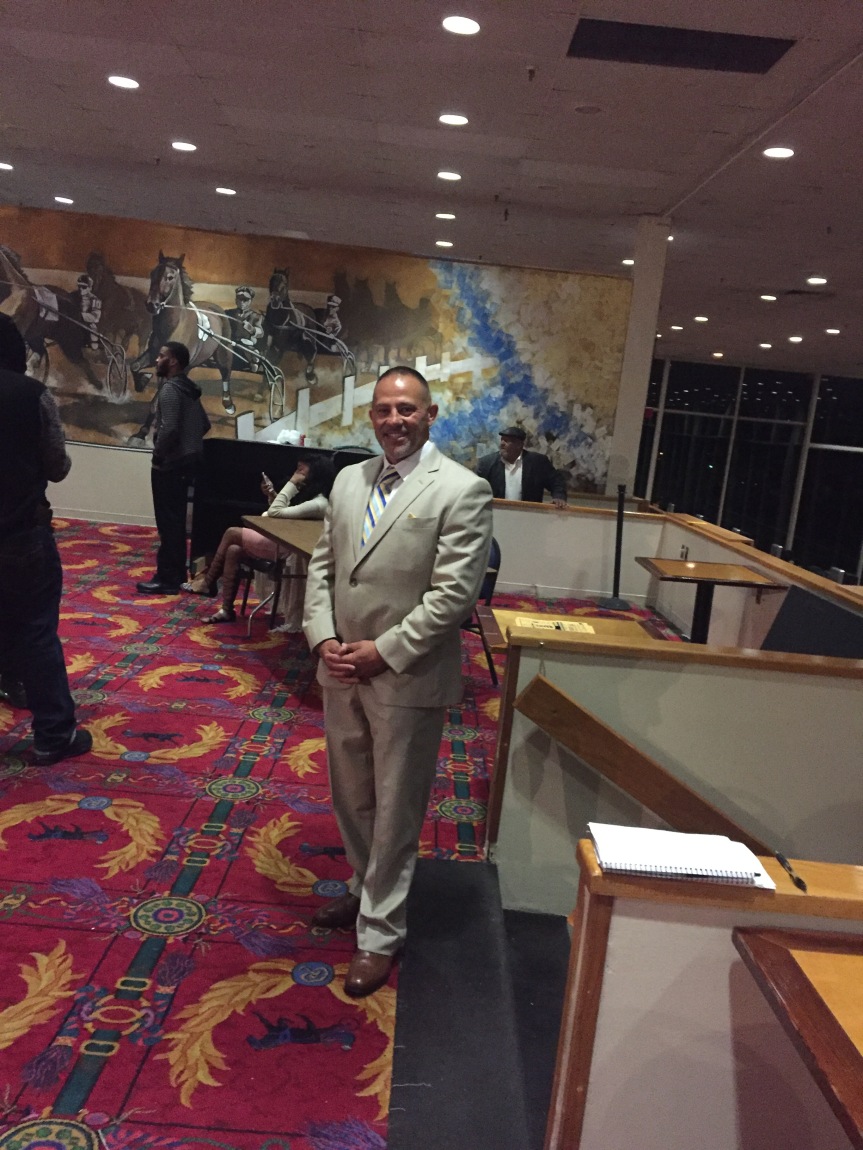 Deon Giles in the 12-13 year old division, defeated Anthony Pullen. 12-year-old Pullen suffered a loss but was gracious in defeat. He stated “I feel good, I know I can work on some other things like conditioning and breathing.” Pullen lost but was far from being a loser. He gave thanks to his opponent Deon Giles, who will continue on to Championship finals. Both young men have bright futures ahead of them.

Tyrek Irby went toe-to-toe with Brian Avelar. Irby pulled out the gritty win.  The knock out of the night belonged to Genc Pllana who scored a 2nd round TKO over D. Marque Hall.

The tenacity of the fighters made for an enjoyable night; here are the results:

Paul Jerry (Fighting For The Future) over Duglas Soto (Down Under)

Hector Soto (Down Under) walkover. 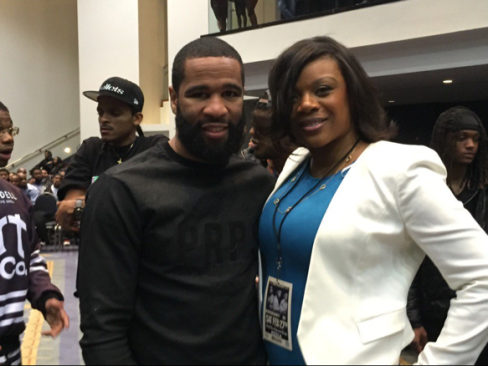 Kings Promotions, “The Battle of the Potomac” unleashed a torrent of boxing at the Walter E. Washington Center in Washington D.C. Saturday Night. The standing room crowd included a who’s who in boxing and politics. Celebrities on hand included, Lamont and Anthony Peterson, Adrien Broner, Dominic Wade (scheduled to take on GGG on April 23rd) and Virginia Governor Terry McAuliffe.

The Main Event featured Super Lightweight Tyrone “Ty” Barnett (23-4-1, 15 KOs). Barnett scored an 8th Round TKO over Daniel “The Prophet” Attah (28-22-1, 11 KOs). Ty controlled the action with his jab stunning right hand, and combos. He prowled the ring like a skilled hunter seeking to destroy its prey. By Round 6, Barnett sent “The Prophet” to the canvas with a vicious right to the body and left to the head. The action picked up in the 8th, with Attah taking the fight to Barnett. Attah would land several shots, which, seemed to stun Ty. However, “The Prophet” could not foresee the Barnett uppercut that sent him to the canvass. Attah would beat the ten count only to be sent to the canvas again. The referee called the bout due to Attah being unable to continue. Time was 2:46

In the Co-Feature of the night, Super Lightweight Mykal “The Professor” Fox (9-0, 2 KOs) maintains his perfect record against Claudinei Lacerda (17-14-1, 12 KOs). The Professor dictated the fight by using his stiff jab to control where he wanted Lacerda’s head to go. In round 1, the baby-face Fox cracked his challenger’s body so hard; it caused Lacerda to take a knee. “The Professor” schooled his opponent throughout the fight, by not only allowing his height and reach to work in his favor, but also by staying quick on his feet. Fox would go on to win the bout by Unanimous Decision: 60-54  and 59-55 2x.

Middleweight Demond Nicholson (16-1, 16KOs) entered the ring with a focus that tore through Jose Valderrama (4-13, 3KOs). Nicholson landed a thunderous body shot which caused Valderrama to take a knee in Round 1. Valderrama would not answer the call before ten, and the referee stopped the fight at 1:46 in the 1st round.

The Super Bowl first introduced us to Sam “Vanilla Gorilla” Crossed (2-0, 1KO) in a Michael and Son commercial, featuring Mike Tyson. The star however, set Hollywood aside, to put on a boxing clinic, of opponent Martez Williamson (1-10, 0KOs) in the Cruiserweight bout. The one-sided fight saw Williamson lose focus and begin threatening to beat several unnamed individuals in the crowd. The clowning in the ring did not translate to a win. Crossed won 40-36, and  39-37 2x.

Antonio “Teflon” Magruder (4-0, 3KOs) stopped Terrell James (1-3-1, 0KOs) by TKO in Round 3. “Teflon” laid the wood to James dropping him twice in Round 1. James would survive the round only to continue to suffer in Round 2.   “Teflon’s” beating of James did not stop in Round 3. He smothered James at the start of Round 3, which in turn caused James to call it quits in this Super Lightweight bout. Time 1:50.

In the “I can’t believe that just happened” bout, Cruiserweight Jordan Shimmell (20-1, 17 KOs) beat Willis Lockett (14-16-5, 5 KOs) by disqualification. Shimmell sent Willis to the canvass twice in Round 2 with several body shots. Willis’ mouthpiece felt it best to be outside his mouth, so Willis’ mouthpiece made appearances on the mat as well as outside the ring, throughout the fight. The referee called the bout due to excessive holding in the 3rd round at 1:23.

Patrick Harris (8-0, 5 KOs) made easy work of fellow Super Lightweight Christopher Russell (3-16-1, 2 KOs) with a vicious body shot that sent Russell to the canvass, in the first round. Russell tried, but eventually could not beat the ten count. Harris gets the Round-One victory at 2:03.

Heavyweight Luther Smith (4-0 4 KOs) won by knock out against Charlemagne Jones (2-5-1, 2 KOs). Smith battered Jones around the ring causing the referee to stop the fight 47 seconds in Round 2.

The opening bout saw Heavyweight, Wesley Triplett (3-0, 1 KO) out point the game challenger Aldando Pugh (1-7-1, 1 KO). Triplett controlled the action by landing the crisper shouts. The 4-round bout ended with a Majority decision for Triplett 39-37 2x, and 40-37 Pugh.