WBC interim middleweight world champion Jermall Charlo (28-0, 21 KOs) scored a unanimous decision over Southpaw journeymen Matt Korobov (28-2, 14 KOs) on Saturday night at Barclays Center in Brooklyn, New York. Korobov was a game opponent who relied on angles to confound the champ. The Champ would rely on his jab and stiff right to disrupt Korobov’s rhythm.  Charlo gave Korobov all he could handle for the first eleven rounds. Charlo finally rocked Korobov in the last round. Scores were 119-108, 116-112, 116-112.

Co-Main event: In what would be the most surprising moment of the evening, Tony Harrison (28-2, 21KOs) was crowned The New Super Welterweight champion, after dethroning former undefeated Jermell “Ironman” Charlo (31-1, 15KOs).  The crowd inside as well as outside Barclays Center was aghast to hear the unanimous decision, given to the clear inevitable loser of the match. The younger Charlo began the bout in an a-typical style, starting as the aggressor, not feeling his opponent out. However, Jermell kept the pressure up chasing his opponent around and landing more shots for most of the night. Harrison did put in some work, ending the 5th with an overhand right to the top of Charlo’s head.  Scores were 116-112, 115-113×2

The Heavyweights Dominic Breazeale (20-1, 18KOs) and Carlos Negron (20-2, 16KOs)  lit the spark for an exciting night of boxing inside of the Barclays Center in Brooklyn, New York.  By the 2nd round, Negron took the upper hand literally, landing 11 of 19 shots. The 3rd became overheated when both combatants continued the fight beyond the bell, nearly causing a ruckus inside the arena. Breazeale takes hold of the reigns, catching Negron straight flush to close out the 4th.  Both would display unsportsmanlike conduct and would be warned throughout the match about “fighting dirty”, by referee, Author Mercante. Round 9 in the most power display of heavyweight prowess, Breazeale overhand right sent spit and blood flying from Negron’s unsuspecting left- side, landing his head and body between different ropes, ultimately ending the fight. Time was 1:37 of Round 9 of a scheduled 10 Rd match up. 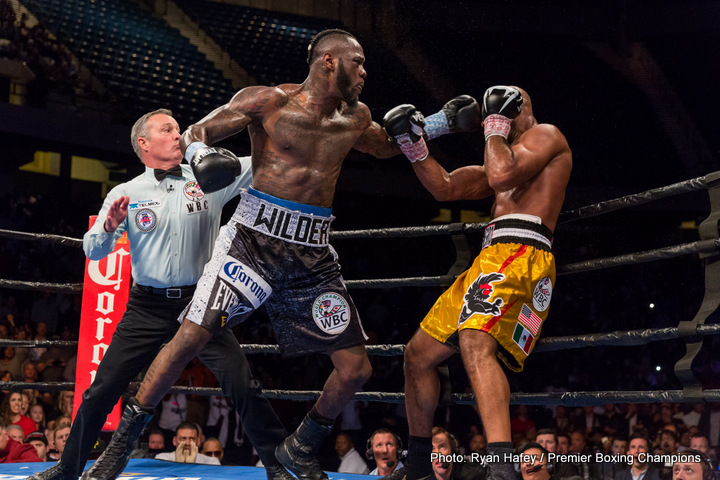 In the knockout that ended it all, the “Bronze Bomber” Deontay Wilder (38-0, 37KOs), remains undefeated, safekeeping the WBC Heavyweight championship belt. Wilder stopped former USC tight and defensive end, Gerald “El Gallo Negro” Washington (18-1,1, 12KOs) 1:45 into the 5th round. The matchup seemed different from Wilders previous fights, with this opponent not being intimidated by a taller Wilder. With only 25-days to prep for the night’s event, Washington maintained ring generalship, and appeared to be the sharper; more aggressive of the two. Wilder initially seemed to sit on right-hand, giving the fight away as he was stalked and chumped around the ring. The early rounds had a seemingly gassed Wilder, being chipped away, round by round. However, In the blink of an eye, one short right hand to the left of Washington’s skull, ended the fight. Something deep inside Wilder was unleashed in lethal fashion, stunning the Alabama crowd, and Washington, who had a comfortable lead.

Jarret “Swift” Hurd (20-0, 14KO), captured the vacated IBF junior middleweight belt formerly held by Jermell Charlo. “Swift”, losing the match in the early rounds, narrowed the point spread, chopping his more skilled opponent, Tony Harrison (24-2, 20KOs) down. Hurd, who was down 5-0 on the Fox Sports unofficial scorecard, began digging in his shots, on an apparent washed out Harrison. The bout was waved off 2:24 into the 9th.

After a career defining loss against Anthony Joshua, back in June of 2016, Dominic “Trouble” Breazeale (18-1, 16KOs) showed heart coming off the mat to KO undefeated heavyweight prospect, Izuagbe Ugonoh (17-1,14KOs). Ugonoh controlled the first 2 rounds, setting off stiff double- jabs, against a sluggish Breazeale. The 3rd round Breazeale would hit the mat, only to trade positions with Ugonoh. Breazeale would cock his right, sending his contender through the ropes. Referee Jeff Dodson called the bout 50 seconds into the 5th round.